Computer Maintenance – Cleaning The Inside of a PC 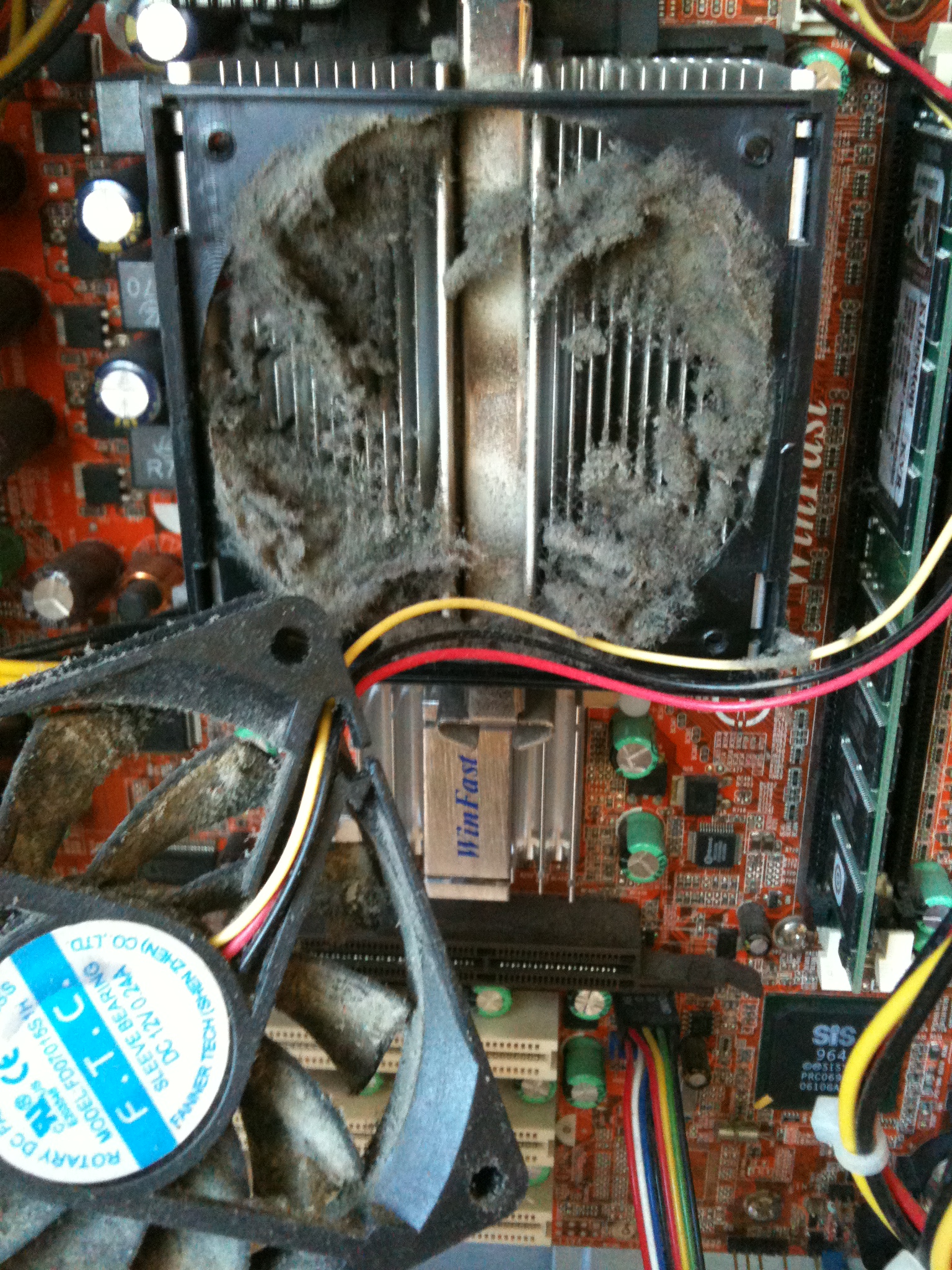 Cleaning The Inside of a PC

What you will need:

A client brought her computer into us as she was having various problems with it, some of which includes not being able to access the internet, unable to load certain programs such as ITunes, and she had also grown tired of the relentless noises coming from the computer.

Although noise is a common problem most people encounter as computers age, the noise can be reduced to the point you wouldn’t even notice it.  I can think of a few reasons the computer would be noisy:

After switching the computer on, I’m able to rule out three of the four points above, there is no rattling, no grinding and the DVD/CD drive is pretty quiet, that leaves only the fans, so let’s open her up and see what condition the fans are in.

Make sure the computer is switched off and that the plug is not connected to the PSU.  Using your screwdriver, unscrew the screws at the back of the computers side panels; be careful not to unscrew the PSU or any screws that are not connected to the side panels.  Place the screws somewhere safe and remove the side panel.  Not all computer cases are opened up the same way, some don’t even have screws, if you can’t figure out how to remove the side panels from your computer, I suggest searching Google for “how to open *insert case/computer name*”.

Now that the panels are off, we can see that there is a lot of dust around the case and on the fans.  This amount of dust is surely the reason for the loud noise the client has mentioned, it can also affect the performance as the fan will not be able to cool the computers processor unit effectively, and so the CPU will use less power and run slower as to not over heat. 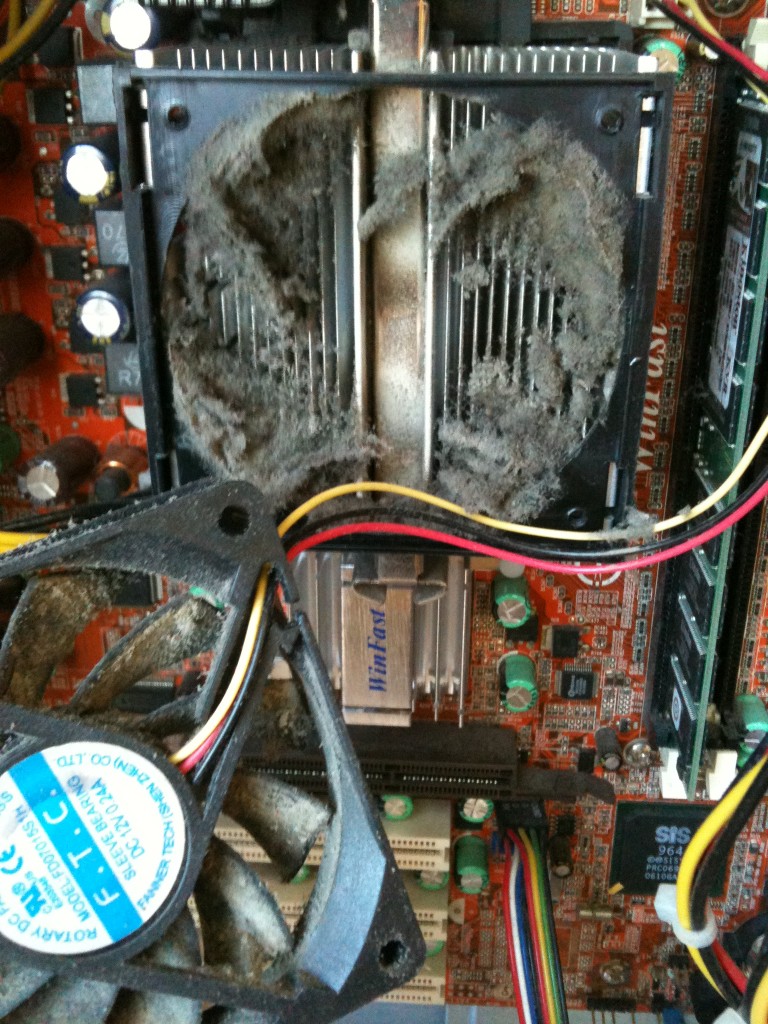 In order for us to clean the fans, we will need to move them away from the computer.  Undo the screws that are holding the fans in place, be careful here not the damage the fans or any of the other components. We also need to disconnect the fan wires that are connected to the motherboard.  Make sure you remember where the wires plug back into.

Once the fans are away from the rest of the computer, use the compressed air to remove the dust. We are going to use the cotton buds and the isopropyl alcohol to remove the dirt in and around the fan blades.  Dip a cotton bud into the isopropyl alcohol and hold the fan blades in place, start removing the dirt using the cotton bud.  Water and a lint free cloth can also be used, though, that combination will not be as effective.

The other components can also be cleaned using the same method as above, such as the graphic card, sound card and the heat sinks, though, only apply liquid to the plastic/metal parts and not the circuitry.

A CPU doesn’t usually need to be cleaned, as they generally have a fan, heat sink and a metal plate layered above it; dirt would rarely get to it.  However, to better allow better conductivity between the CPU and the heat sink, a thin layer of thermal paste is placed on the top of the CPU.  As long as the paste is applied properly it should not need to be cleaned, what you should do, is monitor your computers CPU temperature, if the temperature rises to 60-70 degrees at start-up, there is definitely something wrong.  Cleaning the dust inside your computer and fans should help decrease the temperature, but if it still remains high, you should remove the old thermal paste from your CPU and apply new paste.

Here is a more in-depth guide to removing and applying thermal paste on to your CPU.

Finally, use the compressed air to blow out any dust that still remains inside your computers case. 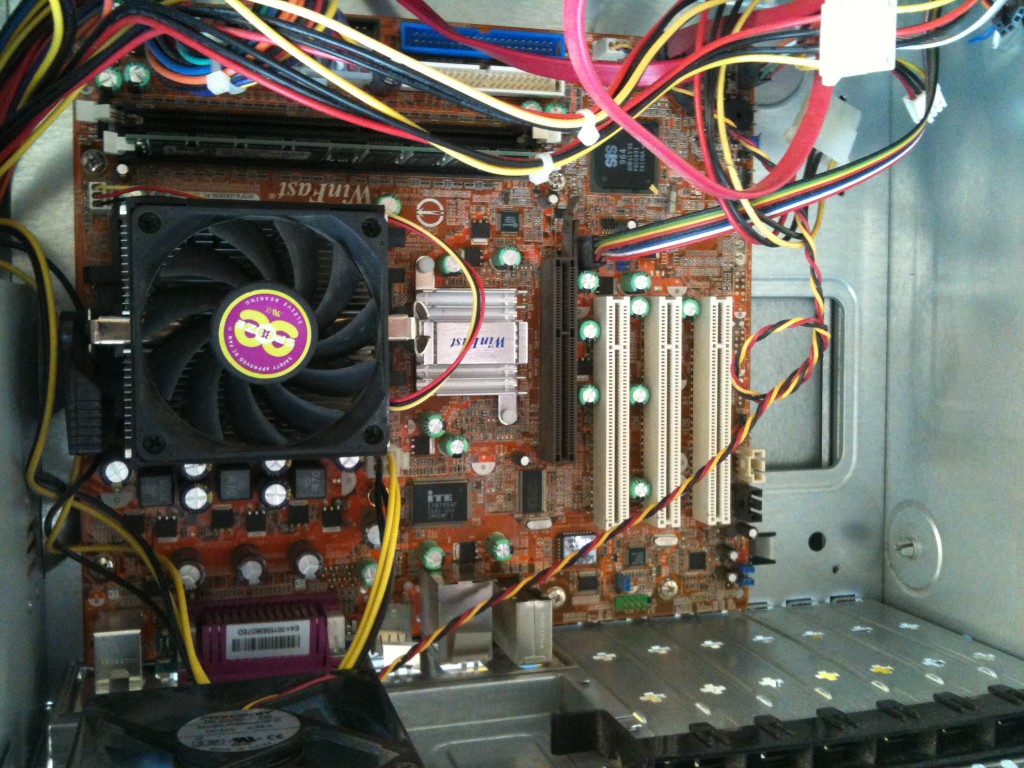 So, after giving her a good cleaning, the computer’s performance is improved and it is much easier on the ears!